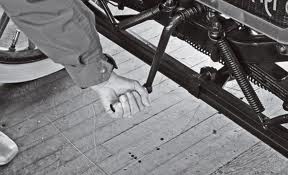 I recently returned from a trip to Atlanta. On my way out of town, I stopped and had lunch with a guy named Matt Cobb. I had been introduced to Matt through Steve Huey, a friend and mentor here in Louisville.

As we met and conversed over lunch, we talked about our currentÂ  and past projects and how they were going. He was working on a startup in the higher education space and we were working in real estate. It was quickly apparent that there was really no way for us to directly work together due to our differing industries.

Still, over lunch we shared stories. Matt talked about his days at Apple in the 80's and later Earthlink. At some point, we were talking about some market vertical decisions for our company in terms of our ability to do custom applications for large enterprises or standard applications for smaller firms.

He noted that he had run a CRM company called Endpoint about 20 years ago, and early on in founding the business he made a decision to provide custom Customer Relationship Management (CRM) systems to large corporations. Shortly after that time, a company by the name of Salesforce.com came along and was providing a standard “out of the box” CRM solution for the small to medium size businesses. Long story short, one is now a multi-billion dollar publicly traded company and the other is an afterthought.

It suddenly hit me the decision we were soon going to have to make in our business: Sell a custom solution or a “out of the box” product.

The thought process led me to think about how by being around and listening to people who have built companies before, you can learn about what to do and not to do.Â  I have heard this referred to as “hand cranking” your startup. It means that you can learn how to build a company through the stories of those who have done it before you. Each conversation, you can take a small tidbit and apply it to what you are currently working on.

This is one reason I would encourage those who are trying their first startup to surround themselves with seasoned entrepreneurs and not investment bankers or accountants. Not that those people can't contribute to your success, but they won't be able to share the war stories that can show you what to do when your co-founder quits, or you are about to lose your biggest client. Those are the times when a mentor who can say “I've been there before” can really help.

Through their stories is the path to your success, you just have to listen and then act.