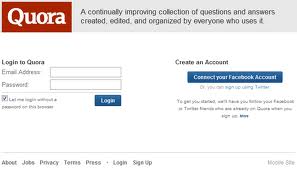 I recently found myself trying a new question and answer site called Quora. I had heard of it several times on blogs as a up and coming tech startup on the West Coast, and finally decided to check it out. As I proceeded to spend an hour or two reading some of the content/discussions on the site, I began to think about how I ended up here and how the site “won my time”.

Disclosure: I spend most of my days building and working on web applications.Â  I make a point to use as many as I can,Â  so getting me to try a new application is not exactly like a regular consumer. I do believe that consistently doing this has given me some unique insight into why some applications become more popular than others. In turn, I wanted to explore further and share.

Social Proof – This is the biggest reason people are compelled to do most anything. As I said above, I had heard about the site several times, but that had not compelled me to try it yet. It was only until the guys over at a popular blog I follow, Venture Hacks, wrote a post talking about why they liked it so much. That personal endorsement from someone I respect gave it the validation needed to finally check it out. This is true of almost any product or application.Â  Its much easier to approach signing up/testing/buying something when someone else validates that process for you. Social proof is what gets people in the door to your business.

As a entrepreneur, how can you initiate the process of creating social proof? Think of people who garner respect in their communities. Their endorsement in many cases can be the breaking point for motivating consumers to try and hopefully buy.

Time Commitment – This is the biggest hurdle any internet business is going to have to overcome in acquiring users. Keith Rabois, a former PayPal & LinkedIn executive, puts it best:

â€œin the real world cutting through the clutter of the 3,000 advertisements per day that the average American is bombarded by is extraordinarily difficult. There are only 24 hours in a day and most are already claimed by family obligations, work, sleep and existing entertainment options; even if you get a userâ€™s attention your new product needs to be so compelling that he is willing to forego something else he is already invested in.Â  To be truly successful on the Internet, you need to build something that becomes one of seven sites that a large swath of users will regularly use.”

With sites like Facebook and Twitter already gobbling hours of people time, your value proposition is going to have to be very compelling to cut into that pie.Â  Think about what this means to someone trying to create a new consumer internet company.Â  It is a true testament to the accomplishments ofÂ  people like Mark Zuckerburg and Jack Dorsey.

Desire to Return – Over half of Facebook’s 500 million users return to the site EVERY DAY. Think about that, the next time you are frustrated because of trouble browsing a friends photo’s.

Something has to compel the user to return again and again. Something remarkable. I think you can boil this down to two things; ways to help people make money, and ways to help people save time. I’ve been trying to think of applications that don’t fall into these two categories, but without much resolve.

Can you think of any?