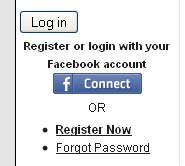 I just recently found myself thinking about Facebookâ€™s growth on the web. It came to me just a few days ago when I noticed their brilliant integration of the â€œlikeâ€ widget into other sites across the web.Â  Facebook is simply but surely planting trojan horses all over the net, integrating their platform to connect information, and annexing the web in a way that hasn't been done before.

“Facebook is becoming the web. Everything you need is there… it is the universe”

I had also noticed and began to think more about how common the â€œFB Connectâ€ button had become. It basically kills the concept of Open ID.Â  Everyone already has a Facebook profile so why not just use that as your registration/login for any new sites. This also integrates the FB platform across any site that uses FB Connect. It will become the new ID for all web users. – Touche, Facebook, Touche. – Another brilliantly simple way to integrate and annex the web.

Mark Cuban also weighed in on this subject, with a recent article called â€œIs Facebook The New Internet?â€ .Â  In this article he also posed the question of if/when Microsoft will attempt to buy Facebook, claiming;

“its straight out of the Microsoft playbook. If you cant beat them or outlast them, buy them.”

A price? My guess is $15-18B, but it could even be higher than that. Will they sell? Microsoft has a good chance with an already established stake in the company, but knowing Zuckerburg, I guarantee he will want to play it out himself.

As speculation continues about whether or not Facebook can become the next tech juggernaut, I think the question becomes: â€œWill Facebook Have their Google moment?â€

In essence; be able to pair awesome technology (in Googleâ€™s case, search) with an amazing business model (a bidding system for text ads) in a way that enables astronomical revenue. Facebook has the technology in its social platform and the advertising model seems viable after it just recently was revealed that Facebook has more page views than anyone on the web (except Google).

Facebook may have turned the corner as a company, but it will be interesting to see how they continue to grow and integrate themselves into the web.Â  As crazy as their growth trajectory has been up to this point, we may be just seeing beginning of the next $200B market cap company.